One of the fun things about teaching Earth Science is helping students understand connections between geology, astronomy, meteorology, and oceanography. One such connection is the link between ice ages and changes in the Earth-Sun relationship. This week's resource is a tutorial that will help students explore Milankovitch Cycles. CLICK HERE to go to the tutorial.

According to the Milankovitch Theory, the advance and retreat of "ice ages" (technically "glaciations, or glacial periods") over the past 3 million years have been caused (at least in part) by changes in the relationship between the Earth and Sun. The theory is named for Serbian astronomer Milutin Milankovitch, who painstakingly calculated how changes in Earth's orbit affected the amount of solar radiation that reached different latitudes at different seasons.

Though he did his work in 1920's, Milankovich's results weren't proven until the 1970s. A 1976 study, which examined deep-sea sediment cores, found that Milankovich's findings corresponded to periods of climate change. Although there is a consensus that Milankovitch cycles do influence the waxing and waning of ice ages, there are several problems. One mystery about the ice ages has to do with the change in frequency of glaciations that happened about 1 mya (see graph above). Why did the timing switch from once every 41,000 years to once every 100,000 years? To read more about Milankovitch Cycles and other mysteries related to ice ages, CLICK HERE. To watch, and listen to, an explanation (pencast), CLICK HERE. 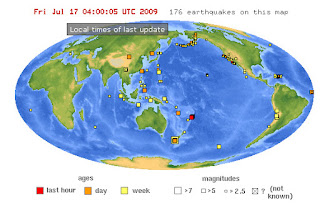 CLICK HERE to see the location of earthquakes over the past 7 days. The interactive map shows worldwide earthquakes with M4.5+ (earthquakes with M2.5+ within the United States and adjacent areas). Colors of the boxes indicate when recent the quakes occurred and the size of the boxes tells the magnitudes. You can zoom in to look at specific areas, and then click on the boxes to learn details. Students will notice the strong correlation between earthquakes and plate boundaries. The site is provided by the the European-Mediterranean Seismological Centre.

By the way, did you know we haven't been using the Richter Scale since 2002? CLICK HERE to find out more.

Here's another resource, posted by Mark Colberg, Associate Prof. of Geol. at Southern Utah University. Colberg's web page outlines the basic principles of earthquakes and provides links to the best animations of seismic waves that I've seen. CLICK HERE to view the page and then scroll down to access the animations. 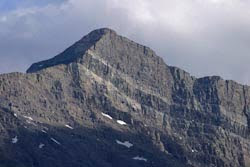 Marli Bryant Miller has provided a collection of geology images that you can download and use. They will make a great addition to presentations. CLICK HERE to view the collection. If you are looking for a particular image, try the search feature. This photo is of the Purcell Sill in Glacier National Park. The sill, which can be seen throughout the park, stands out in contrast to the sedimentary rock above and below it.

Another great source is The Earth Science World Image Bank, which is a service provided by the American Geological Institute (AGI). This Image Bank is designed to provide quality geoscience images to the public, educators, and the geoscience community.


This dramatic demonstration shows students why meteorologists spend so much time talking about areas of high and low pressure. It helps students understand the relationship between rising air, low pressure, expansion, cooling below the dew point, and cloud formation.

BE CAREFUL! If you are not comfortable using rubbing alcohol, fill the jar with hot water and let it set for 10 minutes, then dump almost all of the water out. This will provide air that is humid enough (in the jar) to do the demonstration for several minutes. I like to use rubbing alcohol because I can do the demo all day without messing with filling and emptying the jar with hot water 5 times during the day.
Posted by Rod Benson at 6:00 PM No comments: