Positions of the Continents Interactive 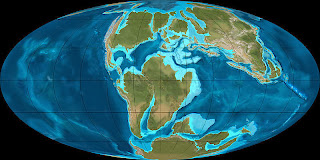 This week's resource is a neat interactive provided by EarthGuide, which is part of the Geosciences Research Division at Scripps Institution of Oceanography. CLICK HERE to try it out.
Posted by Rod Benson at 8:40 AM No comments:

What the hail? - Animation Shows the Role of Updrafts 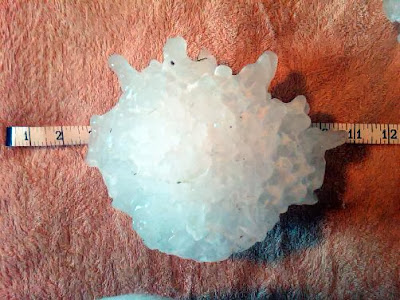 To help students understand how updrafts in a mature thunderstorm can cause hail to grow this large, show them THIS ANIMATION and then CLICK HERE for a detailed explanation.

Right: This hailstone is the largest ever verified in the USA: 8.0 inches in diameter, 18.5 inches in circumference, and 1.9375 pounds. It fell near Vivian, South Dakota in 2010. Lee Scott, who collected the stone, planned to make daiquiris out of the hailstone but decided to put in a freezer before taking it to the National Weather Service for certification (source: Weather Underground). CLICK HERE for more great hail trivia from Weather Underground, including an aerial photo of a town that received 18" of hail in one storm!

Also, CLICK HERE to see an impressive satellite view of the Hi-Line (north-central Montana) before and after a 2007 hail storm.

Below: Map courtesy of the Insurance Institute for Business and Home Safety - CLICK HERE to see a larger version of the map. 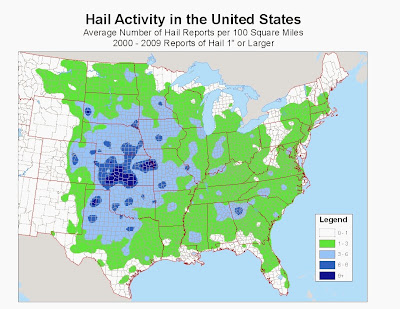 Posted by Rod Benson at 9:00 AM No comments: 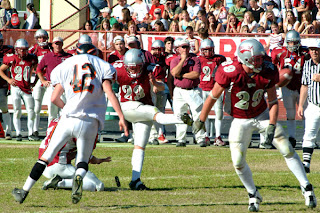 A fun way to introduce students to a study of the atmosphere is to discuss field goals and home runs.

In 2003 Helena High's Dan Carpenter kicked a school-record 53-yard field goal on a warm, sunny, Saturday in October. Arguably that kick earned Dan a scholarship - and today he is the kicker for the Buffalo Bills. To get things started, I tell students about Dan's kick and ask them why that day and that location (Helena) were favorable for kicking the long field goal (there was no wind). As it turns out, on a warm day at high altitude air molecules are more spread out, resulting in less friction on the ball (fewer collisions) as it travels through the air. Interestingly, the density of the air in Denver is only 82% that of air at sea level. To learn more about this go to this web page.

Greatest Kicks in the NFL
Eventually our discussion turns to the NFL, as we look at the longest field goals ever kicked. Until this past weekend, 3 kickers shared the record at 63 yards. Two of those were kicked in Denver, and one was kicked in New Orleans by Tom Dempsey in 1970. I actually show them a YouTube video of Dempsey's kick. Keep in mind that New Orleans is below sea level. This past Sunday, December 8, Matt Prater kicked a NFL record 64-yard field goal in Denver. It is a huge advantage to kick in Denver because of the elevation - but Prater did kick his field goal on a cold day.

What about baseball?
The same principles apply to the flight of a baseball, so Denver's Coors field is a favorite among home-run hitters. By some estimates a baseball will travel 30 feet farther in Denver (compared to sea level). Try this interactive home run simulator see how altitude affects the distance a baseball will travel.

So what about humidity?
Water molecules are less massive than the nitrogen and oxygen molecules they replace, so collisions with water molecules have less influence on the flight of the ball. However, in baseball the balls actually absorb moisture in humid conditions, which makes them a bit heavier - and more importantly it makes them a little softer (less bouncy). In fact baseballs used at Coors Field are actually stored in a humidor to soften them up and counter the affect high altitude. To learn more about the humidor and the situation at Coors Field (including a really good PowerPoint presentation), CLICK HERE. I've often wondered whether the humidity in New Orleans helped or hindered Dempsey's historic kick in 1970.

Posted by Rod Benson at 8:30 AM No comments: 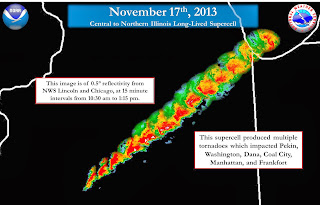 The image shown here is a time-lapse of the tornado that ripped through Washington, IL on November 17, 2013. The colors show precipitation intensity (called a "reflectivity" image). The pattern of precipitation formed a distinct "hook" shape (larger version of image), indicating the thunderstorm had developed rotation (a mesocyclone) on its SW side. Rotation does not guarantee that a tornado will form, but it it a precursor - and this one did spawn a tornado. Evaluation of the aftermath indicated the intensity reached EF-4 as it moved through Washington, IL (aerial photos). Amazingly there were only 2 deaths in the city of over 15,000. Cell phone warnings alerted many who were in church. CLICK HERE to see/read other storm summary resources posted by the National Weather Service. This Wikipedia page is another good source. Also, check out this RADAR PowerPoint presentation that I have posted.
Posted by Rod Benson at 5:47 AM No comments: