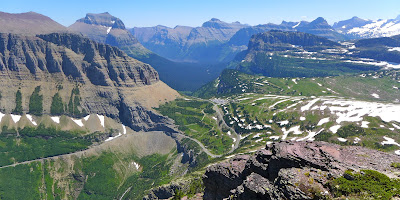 Logan Pass (elevation 6,646 feet) on the Continental Divide is the highest point on the Going-to-the-Sun Road in Glacier National Park. Although there are higher areas in the south-central part of the state, Logan Pass gets more precipitation than any place in Montana. Mountains along the divide force moist air from the Pacific upward, causing cooling by expansion. As the air reaches its dew point, vapor changes to snow (or rain). Also, Arctic air often moves into Montana along the east side of the divide, contributing to the lifting and cooling of Pacific air from the west. An area just east of Logan Pass, called “The Big Drift”, often records over 80 feet of snow, much of it pushed there by strong westerly winds that blow in the winter. A record gust of 139 mph was recorded in April of 2014.

The Going to the Sun Road, which can be seen in the photo, is one of the most scenic drives in the USA, and also one of the most difficult to snowplow. Crews usually begin plowing in early April, and the road is usually open from early June to mid-October, with the latest opening date being July 13, 2011 due to tremendous amounts of snow that fell that winter. The road, which was completed in 1932 and opened in 1933, connects the east entrance of the park (St. Mary) with the west entrance (near Lake McDonald). Although there aren’t many glaciers left in the park, the road provides visitors with excellent views of features carved by glaciers, including, hanging valleys, horns, glacial troughs, arêtes, and cirques. For those who want a closer look, there are several hiking trailheads along the highway, including the spectacular "Highline Trail" that starts at Logan Pass. The trail passes above the highway and below a portion of the Continental Divide known as “The Garden Wall.” The Highline Trail can be seen on the left side of the photo - between the highway and the patches of snow.

2. Hiking the Highline - best trail in the park

4. Wikipedia: Going to the Sun Road