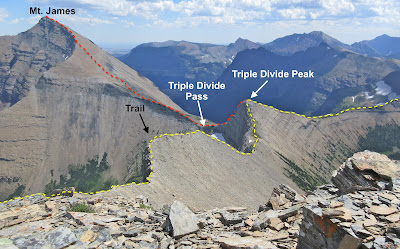 Seven days of weather in 13 seconds! 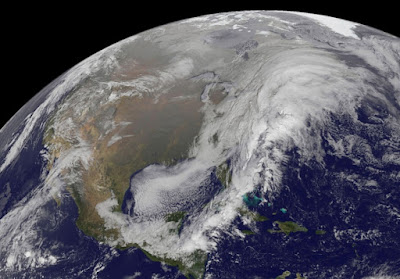 One of the nice things about teaching today compared to when I started in 1982 is the availability of real-time weather-related images and animations. Here's a cool resource provided by the Space Science and Engineering Center at the University of Wisconsin-Madison. It shows 7 days of infrared satellite imagery in a 13-second loop. It moves pretty fast, but you can pause it to point out mid-latitude cyclones, Chinook arches, etc. CLICK HERE to watch it. This page provides several other viewing options, including GOES-East or West, infrared, water vapor, or visible, full-disk or continental US.

Another fun way to show current weather in motion is the WW2010 site provided by the University of Illinois. Once the page open, click on one of the image options, then select animate, choose the number of frames (4-96 hours), and then select "play" or advance the animation one frame at a time.

'Tis the Week of the Solstice 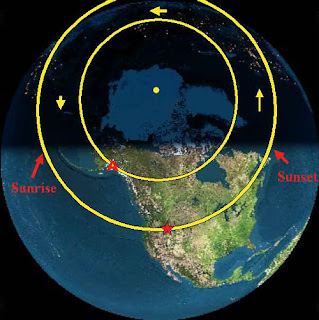 The Sun stops (not really) . . .
This view of Earth helps depicts the Earth on the Winter Solstice (around December 21 each year). It shows why days are so short and nights so long this time of year. To fully understand the shortness of our days, here's a few things to keep in mind:

2. The Earth's axis is tilted 23.5 degrees*. If it weren't, there would be no seasons and every place in the world would have 12 hours of daylight and 12 hours of darkness every day of the year. A common misconception about the seasons is that they are caused by Earth being closer or farther from the Sun at different times of the year. THAT IS NOT CORRECT. In fact the Earth is about 3 million miles closer to the Sun in early January than it is in early July! The average distance from the Earth to the Sun is 93 million miles.

3. The Earth spins on its axis once every 24 hours. This axis runs through the Earth from the North Pole to South Pole.

4. Around December 21, Earth reaches the position on its orbital path where the Northern Hemisphere is tilted away from the Sun. Six months from now, Earth will be on the opposite side of the Sun and our hemisphere will be "leaning" toward the Sun.

Good news and bad news . . .
As shown on the image, on December 21, residents of Helena (star) could have observed sunrise at 8:09 AM. (The large yellow circle shows the path of Helena during the 24 hours it takes Earth to spin on its axis.) As Earth continued to spin, Helena moved into darkness (sunset) at 4:43 PM. So, on this, the "shortest day" of the year, Helena experienced only 7.5 hours of daylight followed by 16.5 hours of darkness. In comparison, Anchorage, Alaska (A) would have experienced about 6 hours of daylight (sunrise at 10:14 AM, sunset at 3:41 PM). The good news is that after December 21, the amount time that Montana gets to spend in the Sun increases by minutes per day. This trend will continue until the Summer Solstice in June.

NOTE: The term "solstice" means "Sun stops." This term is used for December 21 because this is the day that the Sun stops getting lower in the sky (also directly related to Earth's tilt and the position of Earth on its journey around the Sun). This day is also the first official day of winter. On the Summer Solstice (first day of summer), the Sun stops getting higher in the sky.

*The tilt of Earth's axis does change slightly over tens of thousands of years, but the change during the course of one year is insignificant. Term: equinox

Posted by Rod Benson at 7:51 AM No comments:

A picture is worth a thousand words . . . 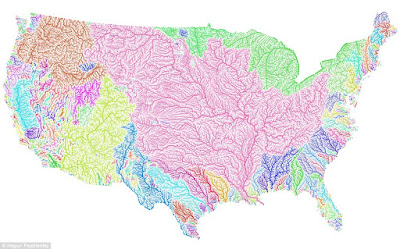 It is very important that students understand how water drains off the land to form streams and rivers that eventually (usually) flow to the ocean. Images like this will definitely help. CLICK HERE to see several other images and an impressive animation, created by Imgur user Fejetlenfej,a geographer and GIS analyst.

A map such as the one shown above can be very effective in helping explain the concept of watersheds (and divides). Click on the map to enlarge - and appreciate the detail. It might also serve as the focus of a "bell-ringer". For example, have students write out 3 quality questions about the map - stipulating that each question must begin with the word "why". Then in your discussion of the bell-ringer, ask if they would be able to use the map to mark the location of the Continental Divide (aka the Great Divide).

Posted by Rod Benson at 9:04 PM No comments:

Great 15-second video of a microburst!

If you know of a better video of a microburst, let me know. This one is great! For more about microbursts CLICK HERE.

Scroll down for older posts, or use the search box in margin to upper right.
Posted by Rod Benson at 6:47 AM 1 comment:

Refraction Caused by a Temperature Inversion 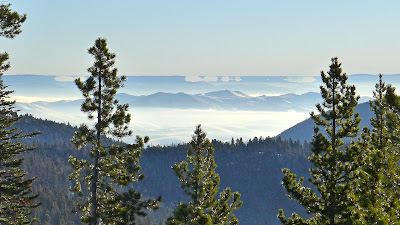 This photo (courtesy of bigskywalker.com) was taken from the Continental Divide trail, about 30 miles northwest of Helena, MT. The valleys were in the midst of a foggy temperature inversion, and a Fata Morgana (superior mirage) was present over the distant mountains. “Fata Morgana” is so-named because it is the Italian name for the Arthurian sorceress Morgan le Fay, and it was believed that she created these illusions of distant castles or land to lure sailors to their deaths. In reality all mirages are due to refraction (bending, redirecting) of light from distant objects - the strange shapes in the photo are the result of light waves from distant mountains being refracted as they traveled through layers of various temperatures (diagram). Apparently the temperature inversion that blanketed the area was one of the factors that allowed the sorceress to do her handiwork. For more about this hike (including many more photos), go to bigskywalker.com.
Posted by Rod Benson at 6:17 AM No comments: