Ancient Ash in the Missouri Breaks of Central Montana 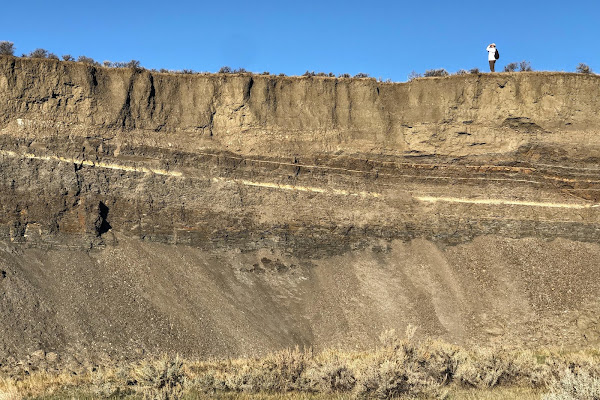 Not a fossilized highway.
This photo was taken along an intermittent tributary of the Missouri River in the Missouri Breaks region of central Montana. The sediments exposed in the cut bank are part of the Bearpaw formation (aka Bearpaw shale). The silts and clays were deposited in the Western Interior Seaway, an inland sea that extended from the Arctic to the Gulf of Mexico during the mid to late Cretaceous period. The part of the sea that covered this part of Montana is sometimes called the Bearpaw Sea, named for the Bears Paw Mountains located 60 miles northwest of here.

Over millions of years the sea advanced and retreated across the region, changing the location of the shoreline and the depth of the water. In the meantime, occasional volcanic eruptions to the west spewed ash that winds carried over the sea. The thicker light-colored layer in the photo is ash from one of those eruptions. A few thinner deposits of ash are also exposed in the cut bank. Volcanic ash deposited in seawater changes over time; weathering converts it into a clay material called bentonite. Although it looks like ash from a distance, it feels like a sticky clay that has little resemblance to the ancient ash that settled here.

In addition to bentonite (altered ash) the Bearpaw formation contains a variety of marine fossils and some dinosaurs. Geologists estimate that sediments of the Bearpaw formation were deposited between 75 and 72 million years ago. In places the formation is 350 meters thick. Outcrops can be found in Montana as well as the Canadian provinces of Alberta and Saskatchewan. As the Western Interior Seaway retreated to the southwest, the Bearpaw shales were covered by deltaic and coastal plains sediments.

The Belt Meteor Crater - NOT! 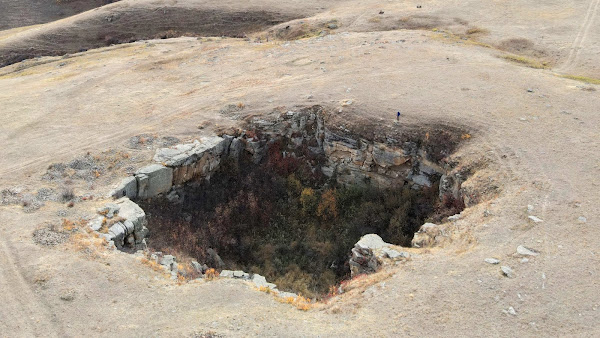 FYI - I took this photo with a drone. That is me standing on the other side of the crater.

Wrong name.
The Belt Meteor Crater, which is located on private land in central Montana, was NOT made by a meteorite slamming into the prairie. It is actually a sinkhole, caused by the dissolution of limestone beneath the surface. The rim of the crater is made of sandstone, but a thick (up to 1700 feet) formation called the Madison limestone underlies the area. As water soaks down through soils above, it becomes slightly acidic. Then as this water works its way down through cracks, it dissolves away the limestone, forming caves. The sinkhole is 100 feet across and 40 feet deep, so a fairly large cave must have formed in the limestone not far beneath the surface here. Eventually the layers of sandstone above the cave collapsed onto the cavern floor to form the sinkhole.

Kill Site.
The Belt Meteor Crater once served as a buffalo jump, or "pishkun", for Native Americans as evidenced by bison bones and arrowheads on the floor of the hole. "Pishkun" is Blackfeet for "deep blood kettle." Scientists visited the sinkhole to collect bison bones that can be carbon-dated to determine when Indians used it. They also found an arrowhead(s) made of obsidian. Experts can determine where the obsidian came from by comparing its mineral composition with obsidian outcrops in the region. This can help provide insights about Native American trade routes.

Map of sinkholes in Florida - May home-owners in Florida actually buy sinkhole insurance!

Posted by Rod Benson at 7:53 AM No comments: