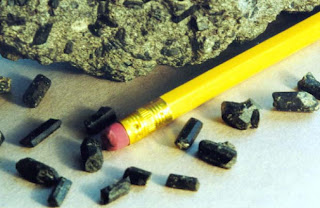 This week's resource is a "virtual field trip" to a butte located in central Montana. Crown Butte is a laccolith that formed over 70 million years ago, and has been exposed by erosion. The butte and surrounding area feature examples of the following: columnar jointing, igneous rock in layers (layered igneous complex), a beautiful porphyry, lateral dikes, and a nearby extinct volcano. The photo on the right shows the porphyry that Crown Butte is made of. The large augite crystals formed before the molten rock moved from the magma chamber into the laccolith.

For a short preview, watch the PowerPoint presentation below, and then CLICK HERE to access the "virtual field trip". Here is the WORKSHEET (pdf file) that students will do as they use the web site. Another version of the worksheet is also available on the web site.

Posted by Rod Benson at 8:30 AM No comments:

Videos that Impress and Educate

Update on the meteor that exploded over Russia: Watch this Video Segment from Saturday's ABC News.

Below: When it comes to greenhouse gases, methane is often overshadowed by carbon dioxide. Your students will remember methane after they see this 2-minute video. Be sure to watch the last 30 seconds!

Below: This is a segment from the documentary, "Chasing Ice", which I watched a couple weeks ago. I highly recommend that you see it on the big screen. The imagery is amazing!

Posted by Rod Benson at 5:03 AM No comments:

Anyone who teaches Earth science knows that density differences play an important role in many Earth systems. This (see video above) is one of the most clever demonstration of density that I've seen in quite some time. The mystery liquid is vegetable oil. Thanks to Rick Dees of Huntley Project High School for sharing it.

Coming on Friday, February 15 . . .
(unrelated to density) An asteroid, 50 m in diameter, will pass within 21,000 miles of Earth. Watch this 4-minute NASA Science Cast video to learn about the details.

One more thing . . .
This week's NOVA looks like it might be pretty good. The two-hour special, titled Earth from Space, airs Wednesday evening, February 13 on PBS.

Posted by Rod Benson at 5:34 PM No comments:

The first 3 minutes of this video show how to do the activity. The final 4 minutes are highlights of my students doing the activity. CLICK HERE to read the guidelines, and gain access to a PowerPoint and a student handout.

Hidden heat . . .
Most people understand that storms transport moisture from the oceans to continents. But, another important aspect of storms, often over-looked and not well-understood, is that they transport heat as well. It's easy to convince students that water molecules in those snow-flakes falling outside evaporated from the ocean a few days ago, however convincing them that storms transport heat is a tougher sell. Actually, the two (moisture and heat) are closely related. As water molecules evaporate from the ocean, they absorb heat in order to make the phase change. Then, as that vapor changes back into liquid droplets in a hurricane or ice crystals in a winter storm, this heat is released into the surrounding air. Called latent heat, this is the "energy" that fuels hurricanes and the warmth of Chinook winds, and it plays an important role in microbursts and other interesting things that happen in the real world.

Seeing is believing . . .
The best thing about this activity is that students actually get to watch the temperature of water rise dramatically as water freezes right before their eyes! They will use a beaker of salty slush to supercool (-5) two test tubes of water. Then they will "trigger" the freezing. As the water molecules change from liquid to ice (within seconds), they release latent heat. This causes the temperature of of thermometers in the water to rise (also within seconds). The show doesn't last long, but it is pretty cool to see the surprise on students' faces as they watch it happen.