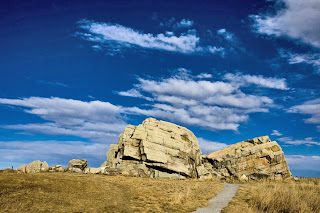 The Okotoks Erratic (a.k.a. Big Rock) is the world's largest known glacial erratic. This huge piece(s) of quartzite sits on the Alberta prairie about 11 miles south of Calgary.

What's more interesting is that Big Rock is part of a long line of erratics strewn from Jasper National Park into northern Montana (see map below). Geologists believe the rocks were part of a rockslide that fell onto a glacier in the Tonquin Valley of Jasper Park and were carried by ice southward along the mountains. Apparently glaciers flowing from the Canadian Rockies out onto the prairie were turned southward as they converged with the Laurentide Ice Sheet (map). The band of rocks is know as the Foothills Erratics Train. To learn more about the Okotoks Erratic and read the Blackfoot story of how it broke into two pieces, CLICK HERE.

A similar (but much smaller) line of erratics, called the Snake Butte Boulder Train (map), can be found in north-central Montana on the Ft. Belknap Reservation (photo). To view a convenient list of all the resources that have been posted on this "Earth Science Guy" blog site, CLICK HERE. 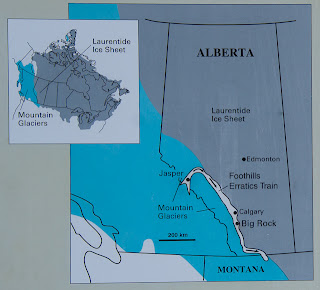