Pacific Decadal Oscillation - Another Player in the Climate Game 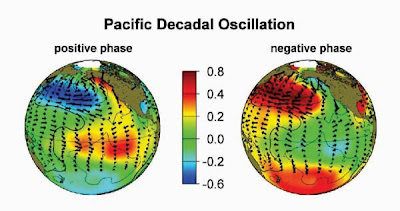 An anchorman on one of the major networks recently mentioned the "Pacific Decadal Ocsillation" during a story about weather. I'd heard about the PDO during my involvement in a research program at the Montana State University Paleoclimatology Lab a couple years ago, but never really understood it - and certainly didn't expect to be hearing about it on the 5 o'clock news!

In my quest to learn more, I found a few websites that provided explanations posted by various organizations. The State Climate Office of N. Carolina provides a general explanation that was very helpful, considering my limited expertise in this area. According to the climate office, The Pacific Decadal Oscillation (PDO) is a pattern of Pacific climate variability similar to ENSO (El Niño - Southern Oscillation) in character, but which varies over a much longer time scale. The PDO can remain in the same phase for 20 to 30 years, while ENSO cycles typically only last 6 to 18 months. The PDO, like ENSO, consists of a warm and cool phase which alters upper level atmospheric winds (compare PDO and ENSO). Shifts in the PDO phase can have significant implications for global climate, affecting Pacific and Atlantic hurricane activity, droughts and flooding around the Pacific basin, the productivity of marine ecosystems, and global land temperature patterns. Experts also believe the PDO can intensify or diminish the impacts of ENSO according to its phase. If both ENSO and the PDO are in the same phase, it is believed that El Niño/La Nina impacts may be magnified. Conversely, if ENSO and the PDO are out of phase, it has been proposed that they may offset one another, preventing "true" ENSO impacts from occurring.

According to the University of Washington's Joint Institute for the Study of the Atmosphere and Ocean (JISAO), during the warm phase (aka positive phase), higher than normal sea-surface heights caused by warm water form a horseshoe pattern that connects the north, west and southern Pacific, with cool water in the middle (map). During most of the 1980s and 1990s, the Pacific was locked in the PDO's warm phase (see graph below), during which these warm and cool regions are reversed. The JISAO site also notes that "Pacific Decadal Oscillation" was coined by fisheries scientist Steven Hare in the mid-1990's while researching connections between Alaska salmon production cycles and Pacific climate.

Like the ENSO, the cause of the PDO is not understood - and like the ENSO, we may be hearing (and learning) more about the PDO in the years to come. Finally, here is a 6-minute YouTube explanation of the POD.