Hiking into the Crater of Mt. St. Helens

This photo was taken during a hike that I did a few years ago into the crater of Mt. St. Helens. The landscape was rocky and gray with hardly any vegetation - but VERY interesting. Plus, we were treated to an "up close and personal look" at geology in action - glaciation, volcanism, and a canyon being carved by melt-water from Crater Glacier. As an Earth Science teacher, I felt like a kid in a candy store. For more about this trip (many downloadable photos), CLICK HERE. 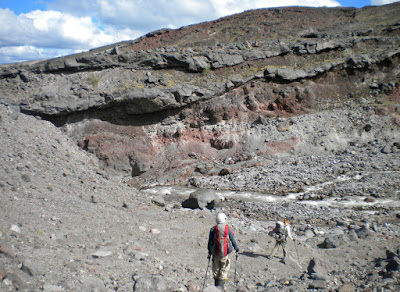 The photo was taken below the crater on the north slope of the volcano. Loowit Creek originates from melting snow and ice in the crater. Much of the water comes from Crater Glacier, which has formed and grown around the lava domes over the past several decades. Loowit Creek has cut down through the volcano, exposing the alternating layers that give composite volcanoes their name. Also known as stratovolcanoes, volcanoes like St. Helens consist of alternating layers of explosively erupted pyroclastics (ash, cinders, etc.) and lava flows.