Tillite Found Among Pile of Erratics in North-Central Montana 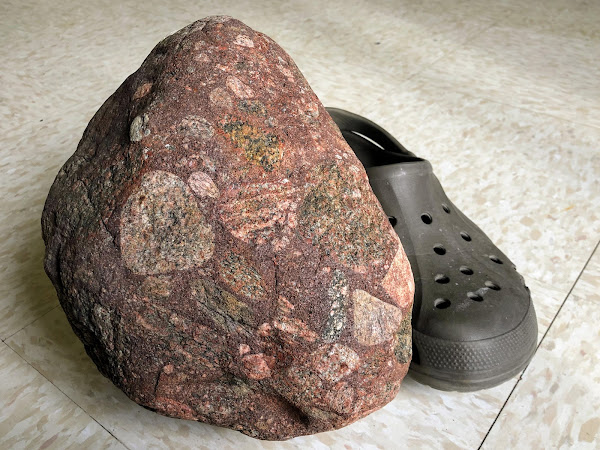 This is a type of rock called “tillite” (a type of diamictite). Tillites consist of poorly sorted* pieces ranging in size from pebbles to boulders, embedded in a matirix of mudstone or sandstone. Meltwater from an ancient glacier somewhere in Canada likely deposited the rock material in a low place near the melting glacier. Over time it lithified (became rock), then was plucked away by a more recent ice sheet, transported to north-central Montana as the ice flowed into this area, and then finally dropped onto the ground when the ice melted. It was found in a pile of erratics on the Fort Belknap Reservation in north-central Montana (see photo below).

*Poorly sorted means that the sediment contains a variety of different sizes of rock materials. River systems tend to sort rock materials according to size by typically depositing larger pieces (gravels) first in valleys, sand-sized pieces next near shorelines, and finally smaller silts and clays in deeper water environments. In contrast, glaciers simply drop whatever pieces they contain where the ice melts – no matter the size. This unsorted rock material is referred to as till.

Below: This pile of erratics is where the tillite shown above was found. Erratics are rocks that have been transported from another area by glaciers. Most of these are metamorphic rocks that came from the Hudson Bay area of Canada. A farmer placed them in this pile just west of Three Buttes (in backgroud), which is located in north-central Montana.